Richard Petty and Richard Childress made headlines Sunday in New Hampshire but not for the reasons we all wanted. Nope, the two haven’t announced a merger, yet. Instead, they both spoke out against athletes kneeling for the National Anthem, aligning themselves with President Donald Trump while furthering NASCAR’s dissent with mainstream culture.

Petty said he would fire any employee that took a knee. He followed that with this irrational thought

“Anybody that don’t stand up for the anthem ought to be out of the country. Period. What got ’em where they’re at? The United States.”

If you want to make a political statement, first speak with proper vocabulary, second maybe understand the constitution. Petty is a peak old white guy, hates progressives, hates anything that he doesn’t agree with. He’s made negative statements about Toyota, women drivers, and President Obama in the last decade. His statements Sunday were less than surprising.

NASCAR’s most winning driver (*) is coming off a public spat with departing sponsor Smithfield as well. Petty needs to be as marketable as possible to potential sponsors. Coming across like an unhinged old man is not the way to do that.

Fellow team owner Richard Childress also hopped on the anti-protesting bandwagon. On protesting Childress offered this response, “It’ll get you a ride on a Greyhound bus.” Insinuating that you will not be able to fly home on the team plane but rather take the bus home.  Childress also told his team the following “anybody that works for me should respect the country we live in. So many people gave their lives for it. This is America.”

Not shocking that two men from North Carolina who make their living in part off Trump’s fan base would make statements like this. Also not shocking that two guys would believe what FOX News says versus actually understanding what the kneeling protest is about.

This Isn’t About The Military

When Colin Kaepernick first kneeled his message was lost due to his own incompetence by stumbling over his message. At first, he said the flag represented what he views oppresses people of color. Unfortunately, most people didn’t understand fully what he was kneeling over. He isn’t protesting the military, veterans, anything like that.

He is merely protesting the social divide in the United States, the clear discrimination toward people of color, no one can argue against that. Well, a large portion of NASCAR fans likely will. What people need to understand is Kaepernick never said anything negative about the military. People have a skewed idea of this protest thanks in part to awful media coverage and the President tweeting like a scorned high school lover.

Keep Flying That Confederate Flag Though 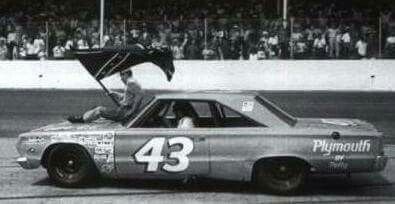 Richard Petty and Richard Childress have never spoken out against the Confederate flag. When that was a hot-button issue two years ago they remained silent. Apparently, a flag that clearly represents hate and racism has a place in the sport, just look in the infield of a race track. You didn’t see anyone outside of Dale Jr. and other drivers speaking out. Weirdly Petty and Childress were absent from those discussions.

It’s easy to speak out when you live in a jaded bubble that is the Southeastern United States. When your fan base mostly shares the same thoughts as you, you’re truly living in a safe place. Freedom of speech is a constitutional right, except when someone doesn’t agree with your ideology. Then they can’t-do it.  You can’t teach an old dog new tricks but you should be able to comprehend rational thoughts and concepts.